Join us Tuesday, April 19 in Kane Hall Room 130 at 7:00 pm for a lecture by General Kevin Chilton on Deterrence in the 21st Century: From Nuclear, To Space, To Cyberspace.

General Chilton served 34 1/2 years in the US Air Force in various flying and staff positions and retired in 2011 as the Commander of U.S. Strategic Command, responsible for the plans and operations of all U.S. forces conducting strategic deterrence and DoD space and cyberspace operations. Prior to his work in Strategic Command, General Chilton commanded Air Force Space Command. During part of his Air Force career he served with NASA and was a Command Astronaut Pilot and flew 3 Space Shuttle missions.  General Chilton has a BS in engineering from the USAF Academy, a Masters in Mechanical Engineering from Columbia University and an honorary Doctor of Laws degree from Creighton University. 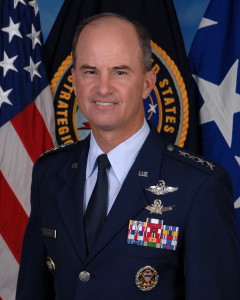