Chief Engineer Scott of Star Trek had an answer to long distance travel (be it interstellar or across a backyard): “beaming”. While the technology of disassembling and reassembling people atom by atom remains elusive, many companies today are focusing on a different kind of “beaming” [1] – mobile robotic telepresence (“MRP”). MRP is different from other existing forms of communication technology as it seeks to operationalize (and, in time, optimize) remote physical interactions as well as mental ones.

Two such companies, InTouch Technologies, Inc., (“InTouch”) and VGo Communications, Inc. (“VGo”), have MRP bots on the market, and for the last few years have been locked in a legal battle that while on paper appears to be about IP, has important import for privacy and accountability in MRP technology [2].

At the crux of the dispute is InTouch’s “arbitration” (for now, let’s agree that “arbitration” means some sort of mechanism that determines who can be granted exclusive access and control to a remote mobile robot) tech patent. VGo – indeed, any telepresence platform – also uses a mechanism that ensures only authorized people can gain access to private commercial or social context. Notwithstanding, InTouch sued them.

The ensuing dispute about whether “arbitration” is obvious (i.e., not patentable), and the Federal Circuit Court’s ruling that it, in fact, was not, clears the way for innovation in MRP privacy and accountability.

The following post is a summary of that decision for lawyers and technologists alike, with an illustrative review of the MRP technology out in the medical field.

In 2012, InTouch filed a patent infringement complaint in the Central District of California against VGo. VGo responded with a counterclaim of non-infringement and invalidity. Not only did the jury find that VGo’s MRP system did not infringe InTouch’s three asserted patents, but they also found claim 79 of InTouch’s ‘357 patent (US Patent No. 6,925,357) and claim 1 of InTouch’s ‘030 patent (US Patent No. 7,593,030) were invalid based on obviousness.

There are four statutory requirements for a patent validity: subject-matter, novelty, utility, and non-obviousness. A patent is invalid for obviousness “if the differences between the subject matter sough to be patented and the prior art are such that the subject matter as a whole would have been obvious at the time the invention was made to a person having ordinary skill in the art to which said matter pertains” [3].

To reach a conclusion regarding obviousness, a court must consider the four Graham factors: (a) the scope and content of the prior art; (b) the differences between the claims and the prior art; (c) the level or ordinary skill in the art; and (d) objective indicia of non-obviousness, which is case specific and can include testimony of the product’s origin, development and commercial success [4]. In general, an analysis of any teaching or motivation from different prior art must be such that the overall inquiry done by the court remains expansive and flexible.

InTouch applied for the three patents in question in 2002. They were granted in 2005. Generally, the patents relate to camera movement (Patent ‘962), arbitrating control of the robot (Patent ‘030), and call back mechanism (Patent ‘357) [6]. In 2008, the US Patent and Trademark Office (“PTO”) re-examined the ‘357 patent: cancelling several original claims and allowing new claims – chief among them, the subsequently disputed claim 79.

“A method of conducting a business tele-conference, comprising

VGo claimed that the three patents were actually invalid: deciding who controls a robot is an obvious thing. VGo supported itself by referencing the prior art in (i) the “Jouppi Patent” [7]; (ii) Dudenhoeffer’s reference, which addresses “the issues and development of command and control [architecture]…rather than require the human operator to interact with each and every individual robot” [8] (this is important because the reference accounts for systems of human control over remote robots; this is “arbitration”, albeit in the context of deployment of large-scale micro-robotic forces); and (iii) Schulz’s reference, which “describes a series of Web interfaces designed to remotely operate mobile robots in public places” and talks about two mechanisms for remote arbitration: first-come-first-serve and democratic voting [9].

To compare the prior art, the district court construed the disputed claims such that:

“arbitrator” = “device that determines which user or station has exclusive control, or which user’s commands the robot should follow”; and

In the aftermath of the district court’s decision, InTouch challenged the court’s construction of the claims. “Arbitration”, they said, should have been construed as “device that allows exclusive control of the mobile robot by one of the remote stations”. In other words, InTouch’s “arbitration” does not require a “determination”/”decision”.

The development on the case is the judgement rendered by the Federal Circuit last month (9 May 2014). Circuit Judge O’Malley reaffirmed the judgement of non-infringement, but reversed the findings of invalidity for Patents ‘357 and ‘030.

However, the reversal is not a question of language. The circuit court did not find that the district court’s construction of “arbitrator” and “arbitration” was in error. InTouch’s challenges (namely, that the arbitrator is not resolving access, but simply allowing access) do not reflect the language of the claim, which does require the arbitrator to consider and resolve access requests among multiple users as a necessary part of controlling access.

The non-infringement, therefore, holds. VGo’s product does not have an arbitrator (as defined correctly by the district court) that “determines” exclusive access of the robot among multiple users. VGo’s product uses the first-come-first-serve rule, i.e., the VGo system “automatically determines” which user gets the bot and there is no resolving mechanism that decides between competing requests.

The district court’s judgement on the invalidity of Patents ‘357 and ‘030 was reversed by the circuit court because VGo’s expert testimony (given by Dr. Yanco in the district court) was deemed to be insufficient. The circuit court held that the evidence relied on by VGo to support obviousness was not substantial enough: “Dr. Yanco’s testimony was plagued by numerous problems, including failure to: (1) identify sufficient reasons or motivations to combine the asserted prior references; (2) focus on the relevant time frame of 2001; or (3) consider any objective evidence of non-obviousness” [10].

The circuit court opined that Dr. Yanco’s testimony was “impermissible hindsight”, in that she spoke only to what a skilled artisan could do in 2011. Further, the jury had relied too much on the success of VGo’s MRP. In fact, O’Malley, J.’s decision asserted that the district court’s decision relied on the jury’s common sense, an error in law as in an obviousness inquiry it is the common sense of one of ordinary skill in the art that matters. VGo failed to meet its burden of proving invalidity of the patents.

Telemedicine is real. The Affordable Care Act specifically promotes the use of telemedicine in both Medicare and Medicaid and includes other health information technology provisions that may provide additional opportunities for the advancement of telemedicine [11].

Under Medicaid, telemedicine is viewed as a cost-effective alternative to the more traditional face-to-face way of providing medical that states can choose to cover. Forty-two states provide some form of Medicaid reimbursement for telemedicine services [12]. Fifteen state legislatures and the District of Columbia have proposed Medicaid telemedicine legislation. As of 20 November 2013, eleven states had enacted such measures [13].

Twenty states and the District of Columbia specify that state-regulated health benefit plans need to pay for telehealth as a way of delivering services covered using “traditional” means [14] [15]. Telepresence -as well as teletrauma and telesurgery- is being integrated into modern care as one of the new frontiers of telemedicine application.

MRPs (*NOTE: only non-anthropomorphic bots and those intended for medical use are considered): 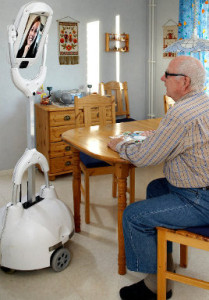 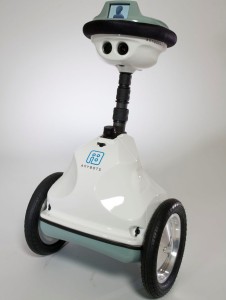 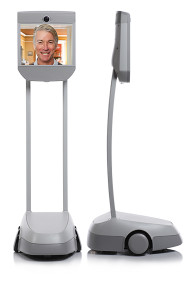 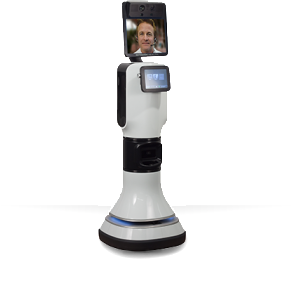 Some current trends in the MRP industry are head design (where tablets displays and phones are used for the display and for interaction for the pilot user integral components of the MRP system) [17] and the integration of Skype for video conferencing.

The most common use of MRPs now is in Intensive Care Units. The advantage of MRPs is a faster response time to patient needs and round-the-clock access. Studies have shown good acceptance and reviews of the technology from nurses and patients [18].

WHERE TO FROM HERE?

The InTouch case should not be skated over. The privacy and IP concerns raised are very real and have to be addressed if MRP technology is to be successful. Beaming brings together remote physical and mental presence in a way that can change –at the very least- the medical service field. If we cannot decide whether the idea of controlling access is obvious or not, then there is a long road ahead.

[1] In fact, BEAMING is the acronym for a four-year (started in 2010) FP7 European Union collaborative MRP project, standing for “Being in Augmented Multi-Moded Naturally-Networked Gatherings”. See: http://beaming-eu.org/publications/deliverable-d72-scoping-report-legal-impacts-beaming-technologies.

[6] Generally, Patent ‘030 and Patent ‘357, referring to arbitrating control of the robot explain that the robot “may be controlled by a number of different users. To accommodate for this the robot may have an arbitration system”. Patent ‘357 states that the arbitration scheme may have one of four mechanisms: notification (“may inform either a present user or a requesting user that another user has, or wants, access to the robot”); timeouts; queue; call back (“informs a user that the robot can be accessed. By way of example, a family user may receive an email that the robot is free for usage”).

[15] For a complete updated review of States with Coverage for Telehealth Services, see: the National Conference of State Legislatures, http://www.ncsl.org/research/health/state-coverage-for-telehealth-services.aspx.

[16] Children’s Specialized Hospital in New Jersey is the first pediatric rehabilitation hospital in country to use a VGo, allowing physicians to interact with the patients at any hour of the day without physically being in the hospital. See: http://hitconsultant.net/2014/04/24/pediatric-rehab-hospital-uses-telemedicine-robot/.

[17] Two examples are Double by DoubleRobotics (www.doublerobotics.com), which focuses on business and education, and the mObi Ballbot platform by Bosanova Robotics.