Answers to “What is Bitcoin” are not difficult to find, from the official Bitcoin.org website to CNN and Wikipedia, there are great videos to explain the tech definition. A short hand for the Bitcoin technical definition is an “open-source peer-to-peer decentralized cryptocurrency”. But what is Bitcoin to regulators? This piece will look at what the law has to say about Bitcoin, what bothers people about Bitcoin and take a look at international regulation.

What is Bitcoin to regulators?

The most common questions that arise when looking at Bitcoin and the law are: is it legal and if it is legal who can regulate it? With a series of opinions from different U.S. federal agencies, it is safe to say that Bitcoin in its current incarnation is legal. So who regulates it? In the U.S. the starting point for regulation is the Constitution, and the Constitution has specific clauses about money. It says that Congress has the authority “to coin money” and “regulate the value thereof.” The Congressional Research Service has asserted this is broad enough to cover digital currency.

Bitcoin is legal and can be regulated, how do we regulate it? Currently, regulation turns on a messy distinction between real currency, virtual currency and convertible currency.  This diagram helps break it down. 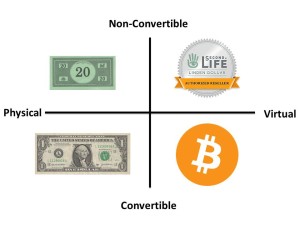 We start with the Dollar bill is real currency; it is convertible in that you can use it to acquire something else in the physical world. What does non-convertible mean? Monopoly money is a good example, it only has value within the game itself. We understand you cannot go buy a cup of coffee with Monopoly money. Similarly, the Second Life Linden Dollar has value within the game of Second Life as a virtual currency but again it is not convertible for a cup of coffee. There are often objections that you can use US Dollars to buy more Linden. Yes, buying additional Linden or other creations for Second Life is possible but again you generally cannot spend it outside of the game. This is where Bitcoin is different, and why it is termed a convertible virtual currency. It is virtual, but there are many real-life businesses that accept Bitcoin as payment for goods and services. In the terms the IRS and Financial Crimes Enforcement Networks of the Department of Treasury (FinCEN) use, Bitcoin has an equivalent value in real currency or acts as a substitute for real currency.

There is one more important key term for understanding the legalities surrounding Bitcoin, legal tender. Legal tender can be used to extinguish public or private debts and a creditor is required to accept legal tender for the settlement of a debt. Bitcoin is an option for merchants (with a number of benefits including lower transaction fees) but it is not required. Why does this distinction matter? By saying Bitcoin is not legal tender we avoid many issues that come with being real currency, including enforcement actions for interfering with Congress’ rights regarding money.

What bothers people about Bitcoin?

The first time most people heard of Bitcoin was in relation to crime and the Silk Road. In 2011, Gawker published an article about “The Underground Website Where You Can Buy Any Drug Imaginable”. By Bitcoin’s description in this article as “the online equivalent of a brown paper bag of cash”, concerns about money laundering were understandable. Senators Charles Schumer and Joe Manchin requested an investigation back in 2011 and as recently as February, 2014 were still seeking to have Bitcoin banned.

However, Bitcoin is not anonymous. It is actually pseudonymous. To understand this, let’s start with the Gawker article author’s assertion that Bitcoin is like cash. Cash can be completely anonymous. It can be used to buy something at a store and, unlike using a bank card that ties name to the purchase, a cash transaction cannot easily be linked to an individual. But is Bitcoin the digital equivalent of cash? Though the possession of Bitcoin can be anonymous, each Bitcoin transaction is recorded in a public log, the block chain and scholars have shown that, though transaction numbers and not names are listed, network analysis allows tracking back to the user. This means the individual’s identity can be disguised, pseudonymous, but they are not anonymous.

However, Bitcoin has also had its first Ponzi scheme and SEC investor alert. As with any investment possibility there are opportunities for fraud, and Trendon Shavers, through the Bitcoin Savings and Trust, claimed he could earn investors 7% a week. For our purpose in regulators interaction with Bitcoin, the most interesting part of this case is that this is likely the first court case determining Bitcoin is legally money. In order to convict Mr. Shavers, the Securities and Exchange Commission (SEC), successfully convinced the court that Bitcoins are money.

The potential for crime and money laundering is one of the larger concerns about Bitcoin but as with any potential for making income or a profit, the IRS is also involved. In March, the IRS determined that Bitcoin is property. What does Bitcoin being property instead of currency mean? Property is subject to capital gains tax. An easy way to understand capital gains is to use a simplified stock transaction. Let’s say you bought a stock March 1, 2013 for $50 and sold it in April 2014 for $250, there is a $200 tax burden. In a more complicated fashion, with Bitcoin, you would need to keep track of how much the Bitcoin was worth when you bought it and the value of the Bitcoin on the day you used it. However, with the current value of Bitcoin at hundreds of dollars you are more likely to use a fraction of a bitcoin, for example .0065 for a cup of coffee. Now you need to know what the Bitcoin was worth when you received it, when you bought coffee and how much it is worth the next time you use it. It sounds burdensome, so much so that Congressman Steve Stockman of the 36th District in Texas has already proposed a bill to change Bitcoin’s tax status from property to currency.

The IRS’ recognition of Bitcoin also means taxes in other areas. Wages paid to employees in Bitcoin or any other virtual currency have to be reported as any other income would on a W-2 and are subject to federal income tax withholding. Interestingly, the IRS also determined that independent Bitcoin miners are self-employed for tax purposes. This means they should pay the self-employment tax though they also potentially get to deduct business expenses like machines and energy bills.

One of the areas that has not received as much attention, is the consumer protection aspect of Bitcoin. Consumer protection is addressed by States Attorneys General, the Federal Trade Commission and even the SEC through their investor alerts. The general goal of Attorneys General and FTC action is to protect consumer rights through pursuing unfair and deceptive trade practices, ensuring competition and accurate information in the market place. Bitcoin has already seen a consumer protection action. In 2013, the New Jersey Attorney General won a million dollar settlement against E-Sports for illegally mining Bitcoins on its customers computers. E-Sports ran anti-cheating services for popular online games, but according to the settlement it used its customers’ computers to create a network to mine Bitcoins without their knowledge. This complaint and settlement viewed Bitcoin mining as a botnet and malware. Consumer protection is an important area to consider when thinking about Bitcoin business innovations, these investigations while not criminal, are time consuming and can end with financial sanctions and shutdown of operations.

Governments are having a variety of responses to Bitcoin. While the US might indeed be killing Bitcoin with government regulatory kindness, other countries cover a spectrum from banning it to deciding no new regulation is needed. China and Thailand have banned its use by financial institutions. In a more favorable report in 2012, the European Central Bank published one of the first comprehensive reports on virtual currency. In it they provide a useful framework for evaluating the different types of virtual currency and conclude that while virtual currency is inherently unstable, it cannot currently jeopardize financial stability. This determination is likely the foundation for other European countries current hands-off approach to virtual currencies. Some, like Finland have found that it is taxable as property. Denmark appears to have decided it is not covered by current regulations. And many countries inside and outside of the EU have declared it not to be legal tender. If you are interested in how other countries are treating Bitcoin, The Law Library of Congress released a great survey of 40 other countries current view of Bitcoin.

I would like to close this discussion with the suggestion that there is an important role for technologists in policy. How do we get good Bitcoin and virtual currency policy? Part of it is how regulators understand Bitcoin, and technologists can help here in explaining it. Part is having consumers get more comfortable with it, overstock.com and Dish Network accepting it for payment helps, so does positive engagement. Technologists can also help develop best practices to be respectful of consumers. There are many positive opportunities for Bitcoin ahead if we can get the policy and use right.