Today we have an opportunity to put in place global strategies for making progress on grand challenges for tech policy. Well-selected grand challenges convey a sense of vision and push a field forward. At the same time, they must be tractable—that is, consist of actual projects of reasonable scale and ambition—for meaningful progress to be […] 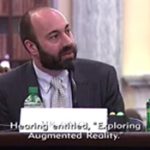 This past July, Lab member Peter Ney presented his work on SeaGlass, a cell-site simulator detection system, at the Knight Foundation Prototype Demo Day in Miami. In the below post, Peter discusses his experience at the event. In February, the Knight Foundation awarded the Prototype Grant to the SeaGlass team (colead by Ian Smith and […]

This week Emily McReynolds will be speaking at the Future of Privacy Forum event Kids & the Connected Home. One of the Tech Policy Lab’s current projects focuses on the privacy and security implications of connected toys, Toys That Listen. Follow the discussion on Twitter at #InternetofToys. Hello Barbie, Amazon Echo, and the home robot […]

With widespread adoption, PokemonGO has brought the novel policy considerations of augmented reality to a wide audience. Over the last week, members of the Lab have highlighted some of these issues. Co-Director Calo, noted the novel nature of a game that requires players to physically travel and potentially actionable nuisance created by the developers (Verge). In an article in New Scientist, Emily McReynolds highlighted the benefits of including a diverse set of stakeholders in the design of these applications.

On June 22, 2016 C0-Director Calo testified before the German Parliament, the Bundestag. He answered questions as part of a hearing before the Committee on the Digital Agenda on "The Effects of Robotics on Economics, Labour and Society." He answered questions about the application of robotics, automation, and artificial intelligence for economic growth; and identified a number of issues regulatory issues legislators will face.

Sarah Hubbard, a student Research Assistant with the Lab, and Hannah Misenar just recently completed their Information School Capstone on a concept they call the “Robot Operator License”. After being exposed to a variety of tech policy issues with emerging technologies through the Lab, Sarah was interested in exploring the challenges and opportunities with the […]

On Tuesday, May 24, the Lab and the UW School of Law co-hosted the first of four White House public workshops on artificial intelligence. Deputy CTO Ed Felton and other members of the White House Office of Science and Technology Policy spoke on panels and were in attendance for the workshop. Other speakers included Lab Co-Director Ryan Calo, Oren Etzioni, Kellye Testy, R. David Edelman, Pedro Domingos, Deirdre Mulligan, Kate Crawford, Jack Balkin, and Camille Fischer.

The Tech Policy Lab is delighted to announce a public workshop on the law and policy of artificial intelligence, co-hosted by the White House and UW’s School of Law. The event places leading artificial intelligence experts from academia and industry in conversation with government officials interested in developing a wise and effective policy framework for […]